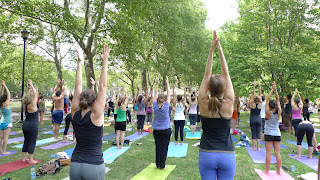 Escape to Yoga Island: a day festival on Governor's Island, NY City.
How is it possible that waking up at 3 in the morning can feel normal? As if some strange order has been restored in the universe, at least in this extreme version of it, dominated by ashtanga yoga. Having my prana-inducing coffee, preparing for my morning ablutions, waking up, getting ready, plating my hair takes on ritual importance. All of it, inspiring the proper zone, where there is head and heart space for the practice.

Today is special. I will be teaching Mysore class in Manila--I've picked up Wednesday, 6 a.m. and Saturday 8 a.m. class at Echo Yoga on Perea in Makati, my first ever regular Manila gig outside the occasional subbing. It's also my first time to teach since I left Boracay and launched myself out into the world at large.

Since June 2011, my life has been, quite literally, a journey, spanning the Philippines, the east and west coasts of the United States, across Asia to Mysore, India, where I have been till now. All the while, taking seriously my teacher Sharath's advice: if you want to teach yoga, you have to be a student first. And for the last nine months (again, with this magical number 9, of regeneration and birth!) I have been a student of yoga.

I have been on this unconventional educational odyssey. My daily ashtanga practice went where ever I went. I danced with Pi Villaraza and the rest of the Bahay Kalipay family in Palawan. I took Mysore-style class at with Eddie Stern at Broome Street Temple in New York and Noah Williams in Los Angeles. I sampled some of New York's hippest teachers in a summer yoga festival on Governor's Island: the rockin' Dana Flynn from Laughing Lotus with live music from Sister Shree, the stoic Dharma Mitra, and a super fun breakdance-asana class with Anya Porter and hip-hop DJ. I was able to enjoy an array of teaching styles in the Telluride Yoga Festival in Colorado, from ashtangi David Swenson, shadow yoga teacher Scott Blossom, forest yoga with Alison English, yoga for the common folk with Mark Whitwell, blind-folded vinyasa with Alanna Kaivalya. I delved into bhakti yoga with my dear friends James Boag and Paul Millage in Seattle. I was introduced to Swami Lakshmanjoo through the Universal Shivite Fellowship in Culver City, Los Angeles. And, most importantly, for the last 3 months, I've been sweating under the quiet gaze of my teacher Sharath Jois in Mysore, India. At the same time I was taking philosophy classes, learning basic Sanskrit and taking classical Indian music lessons on top of kirtan. To look back at it now, I am amazed. I have learned a lot.

My main focus has not always been on my asana practice these months, however. I have been living within the context of yoga with family, friends--new and renewed--as well as my closest and dearest who were both "class" mates and teachers. The life lessons I've amassed is yoga beyond the mat.

And now, I find, it's time to bring it back into that rubber, rectangular space. I've been called home ahead of time. Now, one of the gifts of being in Manila is having the opportunity to contribute to the growing yoga community here. While I will always be a student, there comes a time when one must teach and that part of my own greater lesson is to also share some of this energy I've been blessed enough to accrue.


I will be teaching in Manila through the end of March: Mysore-style class, Echo Yoga, Wednesdays 6 a.m. and Saturdays 8 a.m. Hopefully, more soon!