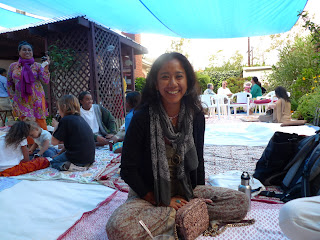 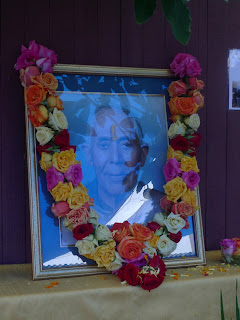 Where there is love, there is grace.

For the last 3 weeks, I've been praying for grace--grace to be strong enough to withstand disappointment, hurt feelings, and sadness, grace to be greater than my limited ego and expectations, grace to be true to myself, my heart and the values I hold dear.

And throughout these past weeks, it feels like my prayers have been answered in the shape of compassionate friends, fortuitous coincidences/fate throwing me a bone--or rather a sumptuous veggie meal, and magnanimous actions that seem so beyond my capabilities that I have surprised even myself and bewildered some very close to me.

Today, grace took an entirely new shape altogether as I attended my first Havan at the Universal Shaiva Fellowship in Culver City, where we celebrated the mahasamadhi of Swami Lakshmanjoo, a spiritual leader devoted to the teaching of Kashmir Shaivism.

I've been curious about Kashmir Shaivism since Mysore, where I'd caught a taste of Kashmiri chants, so full of ras or flavor. During this last Shivaratri, I was privy to a Kashmiri puja over Skype. And now, since my dear friend, the architect of this introduction and my co-creator of the above distress, is here in LA to attend the festivities, I was able to tag along.

He talks a lot about Kashmiri Shaivism and Swami Lakshmanjoo with such devotion. I was curious and baffled--baffled particularly about how he could feel so connected to a teacher who died 20 years ago today. And as my brain tried to process the key words "self-realized saint," I couldn't help but wonder, what's the big deal?

I can't even begin to illustrate what kind of deal it is because I can barely begin to fathom how I've been feeling since this afternoon. Was it big? Huge. Nay, gigantic! But at the same time so totally subtle, sneakily quiet.

The day was filled with chanting, so different from the style of chanting I'm used to in my own yoga practice--which I also love. There's something totally enthralling about it. Time passed so swiftly.

As the Kali temple priests stoked the fire, we chanted. And as I chanted, I started to mentally throw different ideas into the fire. When my mind was empty, I started to extract emotions for the fire. After I'd excavated my heart, I dug out at my guts and threw that in as well. At some point I imagined throwing my entire being into the fire, me standing there, burning up, hoping I would be like a phoenix renewed by the flames. I wanted to be rid of all excesses, all the unnecessary stuff. But I could still feel the same thoughts, the same feelings lodged into my person.

Then I remembered what George, one of the facilitators at the Havan, said, that this wasn't about us but was about Swamiji. In the end, I just gave myself up because the truth is I don't know how to make things better, I don't know how to manage all this. So, I decided to surrender myself to Swami Lakshmanjoo, surely he would know better than I.

And today was no exception. Without going into details, which are too new-age-y even for me to repeat, I will say this: I totally felt Swami Lakshmanjoo's presence. I felt supported by him. I felt his guidance, which made me feel totally vulnerable. All conflict, which I'd been working so hard to repress, floated up to the surface. And I cried. I cried until I felt better. I'll probably have other tear-filled episodes, but for now I feel relief.

I feel the light hand of grace stroking my hair, letting me be sad, but also letting me know that after I let it go everything will be better. Thus begins my initiation into Kashmir Shaivism.
Posted by as always kaz at 10:54 AM