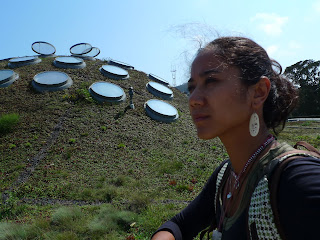 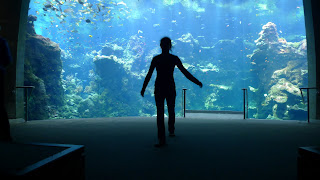 I've arrived home in Los Angeles. I use the term "home" loosely. Its where I grew up. Its where my mom lives. And when I come home to visit her, its here. Even when the apartment changes, its still LA--a topic which deserves it's own article, so complex are my feelings about this city. But I'll get to that later. For now, my thoughts gravitate to the list of friends that must be contacted, get together dates set, connections that I have only a brief time to revisit and tend to, my little desert cacti garden, dry but juicy.

But I know that somehow it will work out, as it has the last two and a half months, which has been absolute magic on the friend front.

The Bay Area, where I was just at, offered the most eclectic web of friends. I felt this interesting convergence of my different parts. My different social groups were all at once validating my presence, I could see who I was through their eyes. With Q, I am sweet college Karen, who she met in '98 when I was her resident. With Cybil and Gwen, I am Kazzie, the spastic balikbayan, American Filipino returning home to the Philippines. With Reggie, I am Kaz, former night owl in the Manila scene. With Deborah and Sharz, I am a fellow yogini and Mysore friend. With Randan, Reggie's beautiful partner, well, aside from a brief encounter 7 years ago, she got to know me for the very first time.

Recently, I've been mulling over this feeling of personal disintegration. There was my island life, my Manila life, my LA life, my life as a poet, my yoga life, my life as a writer. They all seemed so compartmentalized. There was some mingling here and there, but for the most part, each bit felt separate from the other--which I do recognize as a normal occurrence as well.

This last weekend, however, as I traipsed across the East Bay and SF to spend time with this eclectic assemblage of friends, I felt not disintegration but integration. Though these different segments didn't meet each other, they met the same person, me, who I am, the total amalgamation of my sum experiences, habits, personalities.

Most people, if they are objective and fair, will see what you let them. Perhaps, in the past I showed people a few pieces of the jigsaw puzzle out of my own reluctance and lack of self-confidence. I showed friends what I thought they would like about me. I anticipated judgment because I was judgmental of myself. This is hard to admit, let alone write. And to be honest, I didn't really understand it myself until now because as I type this I feel a knot loosen in my chest, a sign that this must be true. (I feel like I should apologize for such poor behavior on my part. It wasn't intentional, I promise...)

But recently, the events in the Pacific Northwest (heart ache induced stress followed by realization and acceptance) have forced some veils to drop. I feel the effects of it. I feel more real and vital, I feel more whole, I feel more certain of the world around me and of who I am. Something shifted. I stopped getting in the way of myself. And since then, I've let myself be. And this is who stepped off the plane in Oakland, the sum total of me, unabridged, uncensored, a little snotty-nosed, a little worse for wear, but wholly totally me.

To those lovely folks in the Bay Area who appeared out of the woodwork to greet me, thank you, I love you. Thank you for being a part of this journey!
Posted by as always kaz at 11:00 AM