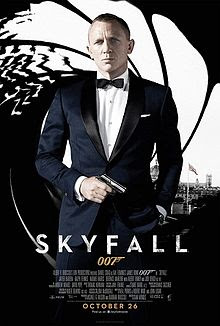 Nearly a year ago, I made a collage that was supposed to be inspired by my life. It was an assignment for "The Artist's Way" by Julia Cameron, which my friend Clara and I, decided to explore during our months together in India. We rummaged through a whole lot of Indian magazines for the allotted 20 minutes, tearing out pictures and words that resonated. In the end, among my cut outs was a page of James Bond through time. I suddenly knew a lot of Jameses. Some as friends, a couple as more than friends, all of them, I felt, had something of import to share with me.

Yesterday, I went to see the latest James Bond film "Skyfall" with one of my Jameses, who is his own version of the international man of mystery, who--I think-- is actually more elusive than a secret agent.

Occasionally, reality and fiction collide. Before us life's little symbols played out on the big screen at the local cinema (actually, a very moderate-sized screen in terms of premier Hollywood blockbuster standards, but the twee English theater was so completely charming, it was absolutely perfect!).

There's Double-0-7, facing his enemy, a former agent turned mastermind criminal, once favored but then given up for dead, a reflection of Bond's own alter-ego, everything that he could have turned into had he completely fallen to the shadow-side of things. The future threat forces him to confront the dark past. His family home, haunted by ghosts of old, becomes a refuge, a place of retreat. But new dangers push on. James, however, is ready and waiting.

There's more to the story, of course. Actually, much more than the typical action/Bond-girl driven film. Themes of new versus old run rampant in the flick: the new technology versus the old fashioned ways of spying, the old guard versus the new guard, etc...Though they mostly tie, we see how the old ways are honored but with the acceptance of the new, a compromise that must be found in a changing world, a balance that is hard to negotiate.

Ultimately, I think the title says it all. Though it alludes to the name of Bond's ancestral home, it also connotes the problem and the solution of this action-drama. "Sky fall" is what happens in life, shit happens, things go pear-shaped, celestial bodies drop down to mere mortal height. "Sky fall" is also the action of surrender as you allow yourself to go through different life challenges, the different levels of psyche.

But can the sky really fall? No, have faith and the true nature of the world will reveal itself.