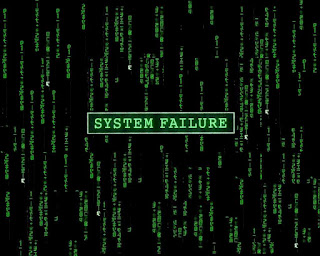 System crashed. More than one it seems.

The first, my laptop's hard drive--which resulted in the loss of all of my work files, all music, all of my personal photos from the last two and a half years, and a piteously small amount of half-refined poems all gone--seems quite small in comparison to the second, which is infinitely more complicated because it doesn't have to do with machines but with people.

And human beings have a range of feelings, volumes of stories, some true and some fabricated, which don't simply stop. There is no shutting it down. Hurt feelings. Stories of separation. They continue to run on and on. There is no simple way to halt this process. It is a complex unending program.

So, I will use my laptop's crashing as a means of making sense to the other system failure. (This is me, the control freak, also trying to make sense of it myself).

According to the lovely IT technician who tried her best to revive my laptop and recover all the treasures locked within it, my hard drive was under stress. I had pushed it to its limits. I didn't let it rest by shutting it down properly. I was traveling with it, and as it moved from place to place, it could not process the tasks at hand, it was burdened. Finally, at one crucial moment, after repeatedly being put into the same situation, the hard drive was corrupted.

Everything and everyone has limits. When we continue to interact in a way that is unhealthy, it will eventually result in some kind of meltdown. In our relationships, especially with family, I think, we get used to operating in a certain way. Many times we know what doesn't work but we do it anyway, sometimes out of habit, sometimes out of ignorance, other times just because we are too afraid to really deal with it. We think: no, it's okay, things are not at their best but at least they are manageable.

Just as I myself knew that really I should have backed up my data, or that I should have taken better care of managing my interaction with my laptop, I also know--really really know--that certain things are not as they should be. If we really examine ourselves and our actions, most of us know the way of truth, of authenticity, but we take the other route anyway.

Prolonged wrong actions, incorrect processes, will ultimately result in a break in the system because it is not sustainable. Some issues never go away, not when you just keep trying to sweep them under a rug somewhere. They pile up, grow heavy. And all that unnecessary weight will make one fall over one day. Crash. Man down. Emotional carnage everywhere.

However, in most cases, a system failure, though it may bring immediate troubles, can also invite the reassessment and revamping of the system to bring it into proper working order -- that is in keeping with the current, broader operating system/reality.

Now my hard drive has been replaced. My laptop is once again revived. Lighter than before. I lost a lot of data, much of which is irreplaceable. But I lost a lot of untold garbage too. Things I'd been meaning to clean out but never got the chance to. Gone. Poof. Into the ether.

And while I do feel the loss, I am also thrilled at the opportunity for a fresh start. An opportunity to operate in a better way, in a healthier way, in a way where all things are integrated properly under one working system. I hope to bring the same optimism to my recent human collisions. Because we all want this, in the machines that have become the expression of our lives and in our actual lives as well.