ways of the yogic warrior 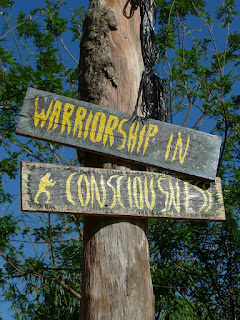 Drona, the great archer and acharya to the Kauravas and Pandavas:

The master turned to his other pupils. "How could you bring the bird down unless you saw it properly first? That is what you must learn: to see the target and nothing else. Archery is no less than dhyana. Only he who treats it as such, only he who is reposed in his archery and gives himself to it utterly, can be a master…Never think of yourselves as shooting at targets that do not shoot back. That isn’t the way of the warrior."

It’s a recurring theme recently: this warrior-ship. It first really came up for me when I was taking James' course on the Bhagavad Gita in Mysore 2010. Since then, I've come to realize, that I've partly been at war, war with old karmic patterns, war with my very own self.

Now, it’s just everywhere. Before I left Manila, I manically finished the two seasons of HBO’s “Game of Thrones,” which had a few key characters that exhibit the characteristics of the yogic warrior, peace-loving by nature but steady in their strength and their dharma and when pushed are ready to fight.

Recently, Paolo Coehlo’s “Warrior of Light” has landed on my bedside table and I’ve taken to reading his bright pearls of wisdom from time to time. When James and I recently taught in Bahay Kalipay, a former kick-boxer-slash-economist Tom was running an on-going spiritual warriorship training in its sister-conscious community Maia.

And now I am reading—quite zealously, I might add—a modern retelling of The Mahabharata by Ramesh Menon, whose version of the Ramayana I also enjoyed last summer. The entire epic tale illustrates a great fight between the forces of good and evil, and the warriors that have been given the task of bringing balance to the force. Perhaps I should watch “Star Wars” next…

It seems like an oxymoron, putting the concepts of “yoga” and the “warrior” together. But the analogy really fits. The struggle that exists in the day to day is real. The battle between our egos and our true natures is raging—all the bloody time!

I think the more we embrace this truth, that we are all embroiled in some internal battle, while most of the time fighting off several external demons simultaneously, the more prepared we are to fight the good fight. We can discern the enemies. We can sharpen our tools of war and our arsenal of defenses. We can be calm in adversity. Cool under pressure. Wise in our warrior-ship.