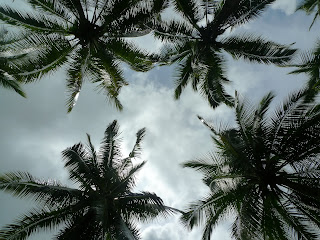 Manila. Again, I am struck again by this idea: there are no coincidences.

It’s been a crazy couple of days, the last in the Philippines for the next 5 months. Totally in keeping with my vata-deranged self, I flew around crazily running errands, seeing friends, spending time with family. I’ve been whining a little, how little time there was to sit and absorb all that has happened in the months that I’ve been traveling.

But now, here, waiting for my flight to Kuala Lumpur at the airport, I see how this short time at home has been grounding, recharging and reaffirming. Amidst all the activity, it has served as a pause in between breaths, a small instance of stillness filled with volumes of new understanding.

Among the many happy “happenstances,” that occurred over my last day here was bumping into Pi, my friend and inner dance teacher who was at M Café to meet our mutual friend Claudia, who I knew was stuck in Caticlan due to torrential rains.

Pi, who’s been privy to some of my recent struggles, asked how I was doing. I explained that I was finding things difficult until, that is, I returned to home to the Philippines.

“Of course, that makes sense,” Pi said. And just like that I realized that coming home did have a profound effect. I know who I am here. That somehow, the heat and humidity, the torrential rains, the tropical green, this land of extremes is a part of my inner strength. I have felt her grounding power. The Philippines has steadied me, reigned in my senses and revived me to myself.

After my brief meeting with Pi, I had the pleasure of catching Martha Atienza’s video presentation at Ayala Museum. An old friend, Martha is an artist and filmmaker whose project “My Heart is Buried in the Sea” looks at her own journey to her childhood home Bantayan Island. I could relate to her journey.

Clara Balaguer, my fellow little heathen and Office of Culture and Design’s mastermind also brought in another amazing director from Spain, Carlos, who captures the “blank spaces” in the lives of ordinary people, seemingly insignificant, but totally thought provoking and meaningful.

I couldn’t help but think that I was meant to be there, to hear from these directors/explorers, to learn about how they documented their journey, to experience the different ways of approaching this process of capturing people, of reaching out, of making meaning out of the everyday mysteries of life.

Later, when I returned home, I was assaulted by a barrage of questions from my aunt’s boyfriend, who I met for the first time. He was trying to understand yoga and decided to interview me. Tired and hungry after being stuck in Manila rain-induced traffic, it was somewhat a challenge, but I managed to answer eloquently. And this amazed me, I’m not often put on the spot like that and he asked some big questions. As I listened to myself speak, I realized, I actually understood what I was talking about. I was actually making sense.

When I muse about those last moments in the Manila, I like to think that the Universe was trying to give me some parting advice: Home is here for me, I can always draw on its strength, it will always welcome me back. But for now, I must travel. And as I do so I should work towards documenting it in creative, new ways. Now as I go off on my second trip to India, I should trust myself and what I understand about this amazing process called yoga, that the foundations are now there to build greater understanding. Thus the universe sends me out on a new and exciting adventure.

Email ThisBlogThis!Share to TwitterShare to FacebookShare to Pinterest
Labels: manila