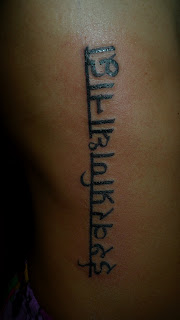 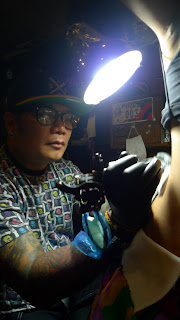 Some commitments are not to be taken lightly. And there are none more important than the ones we make with ourselves.

Last week, before I left Manila for India, I decided to get inked. Not my first, though I may not seem the type.

Each time I have been to the needle has been a special rite of passage, a ritual marking a special time of my life, a reaffirmation of the values that I personally hold dear. I had my first done right after I graduated from college at Berkeley, a dragon which is my birth year according to the Chinese calendar. Not too thought out, but I was young and the intention was there.

In my early adulthood, I had "one love" tattooed in alibata, an old Filipino alphabet. Work-wise, I had been through a difficult trial, my personal values had been challenged and my self-belief was shaken. I wanted to remind myself of what is now the spirit of this blog, that there is this amazing universal love that exists everywhere, constant, nourishing, and that I am, like everyone, a part of this infinite love.

When I was in the US this summer, amidst life's chaotic whirlwind, it occurred to me that not only was I ready for my next inking, but I knew exactly what I wanted to have emblazoned on my skin.

I was in a tough spot a couple of months ago. Everything appeared to be spiraling out of my control. I could have fought or given myself up to despair. Neither options appealed much. I felt lost and ignorant. I didn't know how to solve the intricate beatings/yearnings of my mind and heart. So I leaned on love and surrendered to the forces that are beyond my limited understanding, believing only that there had to be a greater plan than all this pain and suffering.

Returning to the Philippines, feeling more grounded and more clear, I resolved to make that commitment permanent by having it inked in a place that for me symbolized suffering and dying. I had suffered, but I had also grown from it. Something in me had died. And I think I had to go through that. New beginnings come after endings. We die, we are reborn.

So, in Sanskrit, burning still on my side is line 23 from the first chapter of the Yoga Sutras of Patanjali. "Ishvarapranidhanadva." To me it means my surrender to the Supreme, in whatever form He/She/It decides to take.

I surrender to God.

To write it. To feel it. To see it. I can't help but feel this intense connection with myself and the world around me. I fill with love, with goodness, with infinite possibility.
Posted by as always kaz at 12:01 PM