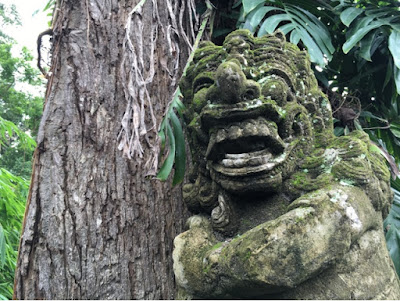 On my last day in Ubud, I planned to visit Pura Gunung Lebah, a temple I'd passed nearly every day as I shuffled between the village where I was staying and the heart of town. The temple seemed to call from its mysterious perch, on a small hill below the Campuhan Bridge, nestled in dense forest, where two rivers below meet.

Although I usually love playing tourist, particularly visiting old sacred sites whether they are temples, churches or mosques, I had put off the excursion as temple visits in Bali require donning the traditional temple clothes: Balinese sarong, a modest blouse adorned with local crafted lace, and a bright sash, wrapped around the waist. Just that extra little effort, not to mention the tropical warm climate, seemed to deter me from executing a plan of action, even though I had already borrowed the necessary traditional dress from my friend Clara with whom I was visiting.

Getting to the end of my three weeks in Ubud, I wanted to honor my time here by going to temple, giving thanks to the Balinese gods for their graciousness.

It had been a profoundly soft time of healing. Ubud is known for that, everywhere there seems to be some opportunity for healing--with raw or cooked plant-based cuisine, with treatments of varying degrees and depths, with the specialists from all over the world who peddle a variety of healing modalities, new and old, along with a slew of local healers, also of the traditional and non-traditional ilk.

It turns out that this particular temple site played a role in the settling of the area. Early settlers were drawn to this small hill where two rivers crossed, there they built a temple, 8th century thereabouts, the forest surrounding was full of medicinal plants. "Ubad" means medicine, from which the name Ubud draws its origin. The energy of healing has been growing here ever since. 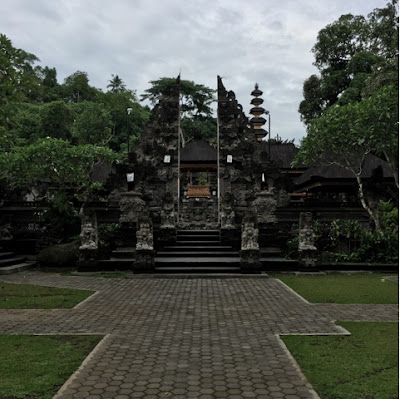 Having been through a beautiful and intense time of healing over the last year, I pretty much thought that my visit to Bali would be reconnecting with a dear friend/sister Clara. In my head, we were to have fun, she was going to show me her Bali, we had some work to discuss, but there was no healing, at present, to do.

The truth about purification is that there are levels upon levels of it. And true optimum health is a great harmony between the body, mind and heart.

What I've learned over the years of working towards a healthy equilibrium is that once I get through one level of healing or purification, I find that there is another deeper level to address, a deeper sense of wellness that now has the space to be established.

My friend, despite being of robust health, actually got Dengue fever during this time, and half of our time together centered around the house where we drank healthy fresh juices, ate good live food along with raw vegan ice cream and lounged around her couch, talking about life. When her feverishness abated, we returned to creative exercises and exchanging ideas on our project. On our last day together she said that the illness had been a great lesson in accepting weakness, yet another phase of healing.

The great task of flushing something out means to also bring the things that lurk in darkness to light. This process is not so easy, most of the time it's uncomfortable, other times, it can be painful.

For me, this time was about addressing my own creative demons. The one thing that I wanted to do ever since I was a young girl of 8 was to write. It can take a lifetime for someone to know what they want to be doing. I knew at age 8. The crazy and sad thing is that I did little to make anything of it.

To meet my friend now, decades later, beautifully derailed by various stages of life, to speak about collaborating, well, at first I was very excited. But during the height of her fever I felt a sort of paralysis, I was so overwhelmed, I didn't know where to begin. Our neat little project had grown into a bit of a monster. Some things still came easy but most of it was like climbing up a mountain, it was toilsome, I felt incredibly heavy.

Over the last year I had embarked on a journey in which I had to acknowledge that my inability to commit in the past, whether it was to one place, to one job, to the right conditions for a healthy relationship, had a lot to do with a fear of failure, I was afraid of not being good enough (an old issue that I have seriously had enough of and am very much done with, thank you very much). Although, I continued to long for these things, I seemed to be making decisions that allowed me to circumvent the possibility of failure, it was easier to avoid, rather than to face it all.

And so here I was, triggered, facing my oldest unfinished dream. It seemed to me I had been here before, my poems coming out of Berkeley, were publishable but I did not put the hard work in to getting more than a couple published. I had built a small reputation for being a lifestyle writer and a spoken work performer in Manila, but I never followed through. I kind of hated the publishing rat race and performing in public made me so nervous. To go deeper, I needed to put myself out there, but instead I found myself backing off, and in this way nothing ever happened, no failures but also no successes. Eventually, the "dream deferred", as Langston Hughes so aptly put it, exhausted me, I opted to not make a living as a writer anymore, I went into teaching and, eventually, teaching yoga.

The fear hasn't gone but I am less deterred by it. I intend to show up for myself, that to practice fully now includes making time to write everyday.

So on that last day, I wanted to thank Bali. I put on the temple clothes with the help of lovely Nyoman, Clara's housekeeper. I had to take demure little steps in the tightly wound crisp sarong, moving with some difficulty as I climbed down the steep steps that led from the bridge down to the river and then up to the temple. As I walked, I expressed quietly my gratefulness and prayers. I felt the sanctity of the place, how below the hubbub of modern day Ubud, life was largely unchanged, the forest continues to flourish, the river continues to flow, and the faithful continue to make their pilgrimages, offerings, and prayers, that healing the old fashioned way continues.

I arrived at the temple steps to find the gate shut and padlocked, which is odd for a temple that is supposed to be open 24 hours. I looked in, taking in the site, then turned around to look at the bridge above, the lush green all around. Everything looks so alive. 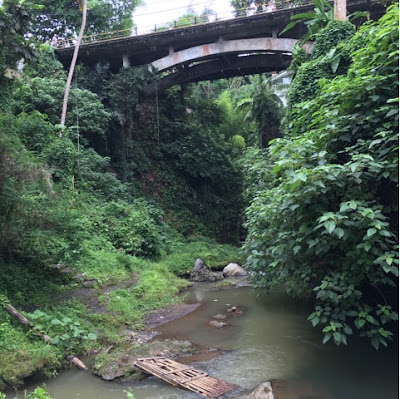 It didn't matter that I didn't get to go inside the temple. What mattered more was the going, I realized, not the actually getting there.

I do not know what this book will look like, when it will be completed, or whether it will even make it to print, what matters now is that I write, that I surrender to the creative process in the same way that I have done to my sadhana, to my practice. That I must try to do it without expectation, that I commit to it no matter whether I am feeling compelled to write or not, whether it is easy or hard, to accept that some days will feel better than others but to go on anyway because ultimately it makes me feel alive and happy. This is a new level of healing work for me, that to do and do again the thing that challenges me to grow and makes me feel full is mighty good medicine.