sisterhood of the traveling mala 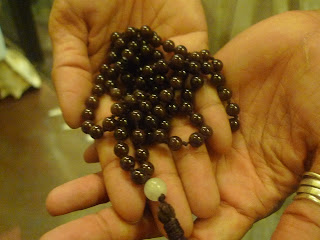 I was surprised at the feel of them, how substantial each bead felt, how warm each round stone would get as I rolled it in between my thumb and side edge of my middle finger. How much energy this garland of prayers shared with me as it hung around my neck? I wondered what it would help me learn, what guidance it would bring in the months that the mala would be in my safe-keeping?

A year ago now, three girlfriends and I were enjoying coffee after self-practice. (Often, the starting point of many many great things). Having converged on the island of Boracay in the Philippines for a month-long yoga program, we were about to go our separate ways. After living on the island for years, Clara and I had already accepted that it was time to leave. Clara was moving to Bali. And I was already living out of a backpack, knowing that the rest of the year would be split between the Philippines, Europe and India. Choc, the youngest among us continuously had itchy feet, she could end up anywhere, at any time. Chit, a longtime island resident, would keep the home fire burning. Heading in various directions, we wondered how we would keep up with each other, how would we support each other over long distance, how would we keep the connection of friendship alive as we each sailed off into a vast sea of change?

And then I remembered the Ann Brashares book that became a popular movie called "Sisterhood of the Traveling Pants." Four young women share a pair of special denim pants, which magically fit all of them perfectly despite having distinctly different body types, Through the summer, each girl has her "time" with the vintage jeans, during which much happens: love, heart-break, closings and openings. Yada, yaga...

We laughed at the possibility of having one object passed around between us as we went off to experience the world. It wouldn't be a pair of pants. Instead, it would be a mala, a string of 108 beads meant for prayer and meditation--being yoga practitioners, that made sense. Chit, who makes beautiful malas from semi-precious stones and crystals, would pick one from her collection. Our collective journey would start with her.

Since then, the deep, dark red garnet mala that Chit selected has been all over: with Chit in Boracay and Thailand, with Clara across South East Asia, India and Europe, with me as I traveled from Palawan in the Philippines to India and back to the Philippines. Each of us infusing our own energy, programming it with experience and wisdom. Instead of sending it by post (very unreliable in Asia) we decided it would exchange hands when two of us meet. And it's worked out so far. For at least two of us at a time, paths cross here and there. Two days ago, I left the string of hopes and prayers with Chit in Boracay. With Chit the beads will continue it's journey. Sometime soon, Choc will receive it. So on and so forth.

Over the last week, I've been thinking a lot about our traveling mala. And about the sisterhood. What it has meant to have this string of beads in my care and what it means to pass it onwards.

In the 6 months the mala has been in my keeping, it has seen me through some very sweet and intense times. It came to me after an incredible time of dismantling. I was on a cleanse in every sense of the word as I spent nearly three weeks at Maia Eco Village in Palawan where there was no electricity, no media, no cooked food even. I was grounding. Meditating to the rising sun. Gardening. Peeing into compost heaps. Inner dancing/exorcising old energies. Reaching into the dark corners and pulling out garbage. Getting my new and like-minded friends, also on similar healing journeys, to help me.

It was a time of allowing old ideas to drop away. And as I returned to the world, it saw me shine with new confidence and it also saw me stumble on old habits. It accompanied me on this journey of self-recovery. Over the 6 months, these friends of mine would also pop up, over email, skype or facebook, each of us somehow understanding that we had a supporting role to play in each others' lives. Over long-distance we gave each other cheers of support, virtual shoulders to cry on, and encouragement.

With our intentions, my three friends and I have put a little bit of magic into these already auspicious beads. Now this necklace of 108 drops of deep red binds us together as a tribe of women explorer-seekers, it reminds us of our commitment to our yoga practice and our commitment to serving each other. Our journeys, though separate and distinct, feel connected. This mala reminds me of the love between women, of a community that knows no boundaries. A sisterhood, yes. But a motherhood and a daughterhood too. A loving council of women. All of which reinforce the preciousness of our divinely feminine energy.

I know this sisterhood exists beyond our small circle, that it is not bound in one talisman or the other, but the mala has certainly helped to make it all the more tangible. Now, as I continue on my own journey without it, I feel the garland of prayers and good intentions, of support and of love so subtly in my own heart, in my veins: a deep fluid red, alive, a sweet and steady river nourishing my body, my mind and my spirit.


Chit is a master mala maker. And I'm not just saying that because she's my friend! If you would like to own a mala made by this very special person, you can contact her via facebook: https://www.facebook.com/chitsmala?ref=ts&fref=ts. She also makes malas made to order.
Posted by as always kaz at 3:04 PM