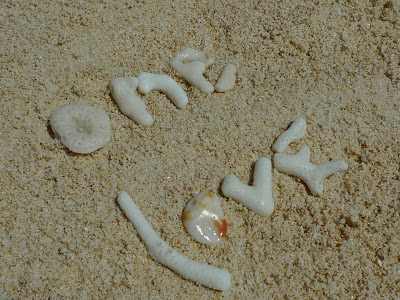 It’s been an interesting journey recently. As usual, filled with a variety of themes. Love and yoga, of course, are constants, but also the idea of marriage. Though each have their particular connotations, they all mean love, they all mean union. Three similar strands woven into my summer tangle.

For me, it started with an innocent thought after a long separation from the beloved. One that I might have easily kept locked securely in my head, but instead shared quite freely, without inhibition. How at that moment I had wanted to say the words that I had hoped to one day hear from someone that I loved and esteemed, with whom "as long as we both shall live" might not seem like much time at all. Though I hadn't meant to propose, the idea had captured us both.

The glow of possibility lasted for about a week. That's when a combination of reality and fear set in, causing the entire relationship to scale back into the shadows of undefinability. And though that saddened me, I have to admit that it also appealed to the part of me that is dead-scared of "marriage" and its evil twin "separation." 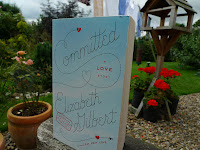 Because I must love torturing myself, I decided to read Elizabeth Gilbert’s follow-up to her best selling “Eat Pray Love"--which  I reread last summer just as I was going through my own heart-breaking (and as it turns out, heart changing/mending) drama. I obviously have an affinity for good ole Liz!

In “Committed,” the obsessive compulsive (but charmingly so!) writer talks herself into marrying her partner Philippe, who is abruptly ejected from the Unites States, her home country. Since Philippe is Brazilian and the US Immigration is more pragmatic then romantic, Philippe was deported after too many extended stays. In order to continue co-habitating in the US, the couple decide to get married--a horrifying thought for two survivors of tragic divorces from their first marriages.

Gilbert delves into how marriage is viewed in different cultures. How the institution has performed certain functions throughout history, from practical day to day survival, to the fiscal, to community-building. How the expectation of happiness from marriage is relatively new to the scene. How there is power embedded in the act of marriage. How there has been a fight as to who might control this power, from the outlaw of slave marriages to the more recent issue of gay marriages in the US. She makes a pretty good argument on why marriage is an act of great subversiveness, one I liked greatly and one which she favors in the end. 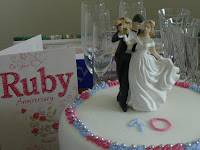 Then I arrived in England just in time to celebrate the ruby wedding anniversary of my friend's parents. The precious red gem is a symbol of great achievement, which suits 40 years of matrimony. It was a low key event, a handful of friends, a lovely meal at a well-appointed local pub, and then champagne, tea and cake at home. The entire day was charming. The sun had come out, the first really nice day since I'd landed. Before lunch, I watched this beautiful older couple excitedly open all their greeting cards, for 40 years inspires many well-wishers, and then give to each other some thoughtfully picked presents: ruby jewelry, a painting admired at an exhibition, a handmade commemorative plate topped with stem ginger chocolate. After lunch, I watched the two cut--in a similar fashion as their wedding day, which was ensured by the comedic best man who made certain all appropriate customs for a ruby anniv were properly observed--into the most moist and drinkable homemade fruit cake, topped with a ceramic groom dipping his bride, a decorative piece that they shopped for together.

For someone like myself, whose parents divorced when I was young, seeing all this is like receiving a soothing, warm balm. It's one thing to contemplate marriage, another thing completely to see it last a lifetime.


Just this last weekend, my new friends Dani and Kalyani got married. Their altar: the dramatic landscape of Ordesa and Monte Perdido National Park in the Spanish Pyranees. Their witnesses: a hundred twenty or so of their friends and family, as well as Mother Nature herself. Theirs is a union steeped in yoga. They met in India just this spring, noticing each other singing to the Devine Mother at the temple at the Sivandanda Ashram in Kerala. They are now, combining dreams, building and running Casa Cuadrau, a beautiful new retreat center in the Village of Vio.

For me, the timing of their meeting is perfect. There was Dani, half a decade, building a house—a foundation for a dream and a life’s calling—which was finally nearly ready. There was Kalyani, at a crossroad, leaving Toronto, pondering her return to Mexico with a desire to start her own yoga project.

This is what I believe: the goddess, in her infinite wisdom, drew them both towards each other. Both had the intention of sharing deeply. Dani had built a house. But together, Kalyani and Dani will build a home. Together, they bring balance. The masculine and the feminine, shiva and shakti, manifest power and infinite creative potential. Their energies will compliment each other. Their mutual love for yoga and their dedication to share from the heart will light the home fire. With their warmth and light, Casa Cuadrau will grow, and so, I suspect, will they.

All these instances seem intertwined with my own love story this season. There are two story lines, actually: loving myself and loving another, which also intersect/collide accordingly.

When I was in Madrid last week, I recalled my last trip to the old Spanish city, almost a year and a half ago. I was walking down one of the romantic little side streets of La Latina, telling a friend, who I was swiftly falling in love with, how I didn't have any role models when it came to married couples, how I was determined to be my own role model. And then, caught up in the moment, we kissed.

I wonder now what kind of a role model I've made since then. Though unmarried, I have certainly welcomed love. I've chased it down. I've given it freely. I've rejoiced at receiving it. I have mourned the moments when it felt as if it were being taken away. I have, on occasion, lost myself in the other, a very very bad habit, I know. I have had expectations. I have been fearful. I have been grasping.

I grew up believing in fairy tales, that there was a charming prince around the corner waiting to save the distressed damsel. When I was older, I began to be fascinated by the concept of soul mates. I was enchanted by creation myths that illustrated the separation of two, the division of lovers, destined to search for one another. All of which reinforced this idea that to feel whole, you had to be in love.

At some point in my adulthood, I gave up on these ideals. In fact, I think I'd given up on love completely. But that day in Madrid and many other days afterwards have changed that.

Over the last couple of years, however, what keeps on coming up for me is that I need to rescue myself. I need to recognize the soul mate deep within. That wholeness is inherent in me, as with everyone. Again, that I need to be my own role model. Concepts that seem so clear and yet seem so easy to forget at the most crucial times. I wholeheartedly believe that if I can keep that self-love steady, then the love for the other will become more fluid, more seamless. And if there is no one particular soul to pour such a river of love into, all is still well.

A couple of weeks ago, Kalyani was telling me about the vows she and Dani plan to share. She explained that she wanted to express how her happiness didn't depend on Dani, nor his on her. Instead, they wanted to share each other's happiness, which was already full to begin with. I guess I feel pretty lucky, the universe seems to once again have my back, sending me role models when I falter at being my own.

For me, this has been this season's yoga, filled with the challenges of connection and the gifts of love. No matter what, it is still love. Love teaches. Love connects. Love lives in all of us.